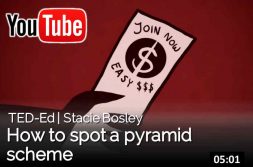 How to spot a pyramid scheme

Learn the techniques and tricks that pyramid schemes use to recruit new members and how to avoid being fooled yourself.


In 2004, a nutrition company offered a life-changing opportunity to earn a full-time income for part-time work. There were only two steps to get started: purchase a $500 kit and recruit two more members. By 2013, the company was making $200 million. There was just one problem — the vast majority of members earned less than they paid in. Stacie Bosley explains what a pyramid scheme is and how to spot one.